Can’t pin us down 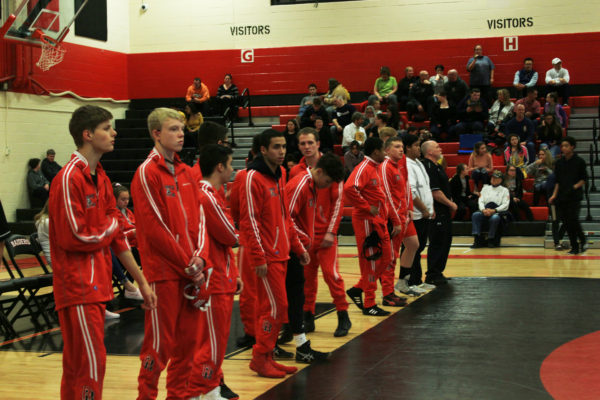 Feature Photo By: Oscar Perez – The entire wrestling team stands on their feet before competing; the match-ups were against Vista Peak High School. The boys lost the match with a score of 48-33.

[ngg src=”galleries” ids=”62″ display=”basic_slideshow”]Editor’s Note: Photo gallery by Amor-Leigh Wilson, wrestling update by Oscar Perez.
By: Amor-Leigh Wilson and Oscar Perez, Review Staff
Rangeview wrestlers claim they are always hungry for success when it comes to one of the most competitive combat sports.

The team has a new head coach this season who has set many standards and expectations. Former Head Coach Tim Corby left behind his impressive 18 year legacy of love, teamwork, and accomplishments for the sport.

Newly appointed Coach Ruben Medina has taken the position; taking the team under his guidance. Coach Medina has had years of experience – but what is really behind this season’s success so far? What’s been the key behind commitment to keep going?

Everything has an obstacle to go up against; for wrestling, it’s cutting weight.

Wrestlers are sometimes forced to drop or gain weight, which some say takes a serious toll on the players’ mental health. It is said by the wrestlers that “dropping weight is one of the worst things to do when competing in such a hands-on hands sport.” Having your body go through such a drastic change can truly be detrimental to one’s health – but it hasn’t stopped the Rangeview boys from competing.

Junior and varsity wrestler Rudy Cortez said, “When it comes down to cutting weight it is always challenging, it’s more of a necessity in order to win…Personally, it’s easier to get into states by competing at a different weight class.”

But how can the team help each other, especially when going through weight cutting? Like any other sport, team communication is key, moving as one is key, and that’s why building a group that competes together is incredibly difficult. One of history’s greatest athletes said it best: “talent wins games, but teamwork and intelligence wins championships.” –Michael Jordan

Anyone can go through life if they have the right people behind them.

Basketball and wrestling are two different sports but without a “team”, one wouldn’t be able to perform. Wrestlers have made sure to build that chemistry; many say teammates are the ones that are there to mentally keep one ready.

When it comes down to competing, there isn’t a direct way to prepare for an opponent like in basketball or football where they can watch films to find weaknesses. A competitor has to mentally prepare themselves for whatever could happen, and it’s always different when it comes down to this type of competition.

Rangeview junior Cameron Stiffler stated, “I personally can’t imagine going through a ‘weight cut’ phase; any type of athlete going through a jurassic change in their body and compete at their fullest are the ones that should be respected the most.”

Keeping a good competitive mindset is the best way to go when finishing off a season. Head Coach Medina mentioned, “the team is real young but we’re doing real well so far. We’ve won a lot of duels and we’ve placed pretty high in team duels… There is always room for improvement, we’re young and we need to prove something each week.”

For the remainder off the season, wrestlers will be going on to compete some more until the State Championship Meets.

Make sure to come out and support the team. Some say there is no better feeling than having a crowd behind you cheering you on. Next tournament will be on Saturday, February 2nd at 8:30 AM where the wrestlers will compete away against Thornton.