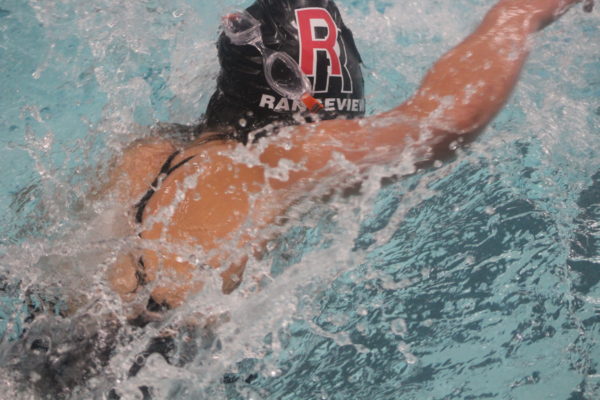 Alasiah Murray pushes through the 400 freestyle relay without goggles on. She was unable to complete her 100 due to her breathing.

Feature Photo By: Mercedes Capozzolo – Alasiah Murray pushes through the 400 freestyle relay without goggles on. She was unable to complete her 100 due to her breathing.

Many say the girls RHS swim team is more than just a group of girls that have a passion to swim, but is a team of champions and hard workers that still receive little recognition from the student body.

The ladies have a 4-1-0 record in leagues only tying 93-93 to their biggest competitor Cherry Creek and a 4-3-1 overall record. They also have a 16-year winning streak at the APS Championships, not slipping up last Saturday during prelims placing first of four at championships. Some may say the ladies have worked too hard to not be seen by the Rangeview student body.

Senior and former varsity swimmer Karly Trimble said, “This team works hard, but doesn’t receive the recognition that it deserves.”

The ladies won EMAC for the first time last year and expect to do the same this year, as well as send more of their swimmers to state, since last year only one diver and one relay race qualified for state.

The ladies’ secret to staying focused centered around how they competed last season and how they want to get better, said senior and varsity captain Lauren Graff.

Aside from maintaining confidence gained from last year, several agree the girls’ season has been full of hard work and hope.

The season has been full of some hectic moments but according to varsity swimmer and junior Jasmine Johnson, “All of the JV swimmers have improved; not just one. Some of the girls came into the season barely able to swim, but have improved so much this season.”

The ladies have come a long way this season and would like to keep this momentum going throughout the end of the season, ending it on a positive note and getting most of their swimmers into states.

“Swim meets can be boring,” Graff admits, “[but] there are really exciting races and moments within our meets and we could really use the support from our student body!”

Come support the lady swim team Friday at 4:30 and Saturday at noon, both at Hinkley High School.