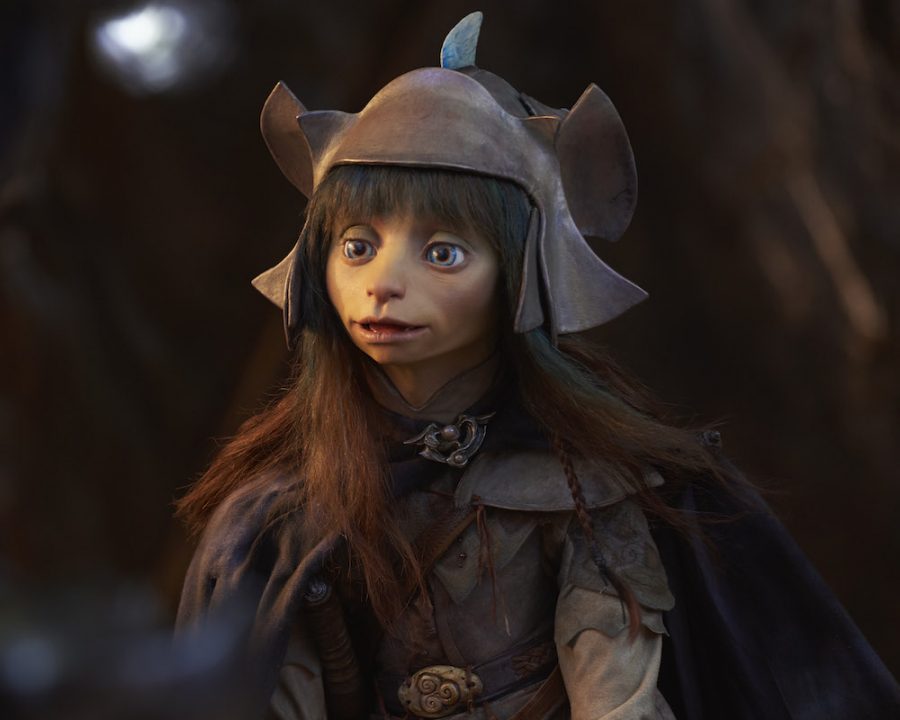 Rian gives a speech to the other Gelfling before battling against the Skeksis. Rian is one of the main characters; one that found out that the Skeksis had been lying to all of the creatures in Thra. (Netflix)

On August 30th of this year, Netflix released the anticipated prequel series, “The Dark Crystal: Age of Resistance”, to Jim Henson’s 1982 movie “The Dark Crystal”; it turned out to have high ratings.

The 37 year old movie captured a new world —called Thra— which is far different from The Muppets universe. It followed the story of Jen —the presumed last creature of his kind— and his adventure to fulfill the prophecy that a Gelfling will find the crystal shard, place it in the dark crystal in the Skeksis castle, and save the world from the Skeksis reign. The world would be balanced once again. 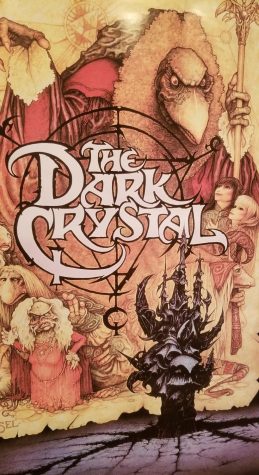 A poster of the original movie hangs on a wall. The picture includes the Skeksis castle, the characters, and the name of the movie.

This new series covers many events 50 years before the movie took place. It answers questions, illustrates character motivations, and opens up more of the story than it ever did before.

I will be rating the series out of five crystals, based on different aspects of the show. I will be comparing the show to the original movie, as well.

The storyline was well written and it definitely made sure to illustrate a big event. There were a lot of times where it was shown how things were made, such as the Garthim and the divide between the Skeksis — a bird-reptilian like creature — and Mystics. Some scenes did seem to drag, which is justifiable when parts of the show don’t necessarily have to be correlated into the story, but the adventure could have gone a little faster. There could’ve been time to add more to the ending, but I guess that’s why the creators inserted a cliffhanger. Don’t get me wrong, many of these scenes were vital to understanding relationships and the storyline, but there were points when they could have been shorter.

“If anything…There was somewhat a sense that the characters were even trying to rehearse the story versus just acting out the parts that they were playing which wasn’t necessarily a bad thing,” safety superintendent Jonathan Eberly said. “I just didn’t know if it would continue doing that. By the second episode it was different…it truly was giving us the story and they weren’t depending on having to explain it specifically.”

It was also very neat to see the episode names, them being lines from the movie.

The personalities were fantastically portrayed and crafted. The Gelfling didn’t have one personality trait; the different clans had so many different actions and feelings. Some clans were very kind and helpful while others were rude or mysterious. This brought depth into their species, much like humans. For example: Deet was a very kind Gelfling, one that fed creatures and traveled with Hup —a Podling— in order to stay safe and have company.

Then, there’s Seladon, the eldest princess of the Vapra Clan. She isn’t as fun as her sisters and despises them for being noticed more than her by their mother. As well as this, there was also a feature of Deet’s parents who happened to be gay. All of these different types of parents were really awesome to see when, in the movie there weren’t parent-child relations.

The Podlings, the really cute characters, are very funny in this show; they drive most of the humor. Their dialogue is much the same as it was in the movie, but some do speak English — most likely due to the Gelfling.

They aren’t given a lot of characteristics, due to them being more like background characters, but Hup is one with a lot of personality. Hup wants to be a paladin for the All-Maudra, using a spoon as his sword. He isn’t afraid to show how he feels about other characters, whether he loves them or not. It’s funny to see him interact with the characters in all aspects, and that’s what made me fall in love with him; because of his humor and kind actions.

The Skeksis are very terrifying and vile. They all have their own ways of being nasty, but in the end they’re all violent and think for themselves. For example: Chamberlain, or skekSil, is manipulative to getting what he wants or what he wants others to do. Most of it is for his own benefit, which really shows how selfish these beings can be. They aren’t afraid to kill or torture one another. If I was in a situation where I was against the Skeksis, I’d be horrified of what they are capable of.

The characters’ design is one of a kind. The details that went onto these puppets were brilliant; each hair on some of the creatures were put on individually, the creases and folds were delicately made and the colors were so beautiful and vibrant. Even the Skeksis had great detail and dark yet perfect colors for their personalities. So much work went into each character and creature.

“They did a good job staying true to the feel of what the original characters and the original movie was all about,” Eberly said.

With the technology we have today, the show was very advanced. The characters both in the movie and the series had much detail. The details in the show were more noticeable thanks to the camera quality, while in the movie things were a bit fuzzier. The voice actors did an outstanding job, however, I will say that some of the voices for the Skeksis weren’t exactly like the movie. It’s understandable, but only a few sounded like they did in the movie. I understand that these are different actors, but it took away from the feel a bit.

One of the coolest parts of the show was seeing the actions brought by age in the characters. Because the show is a prequel, the Skeksis and Mystics were younger; the Skeksis moved faster than in the movie and one of the Mystics even had a bow and arrow, straying away from the typical peaceful Mystic. 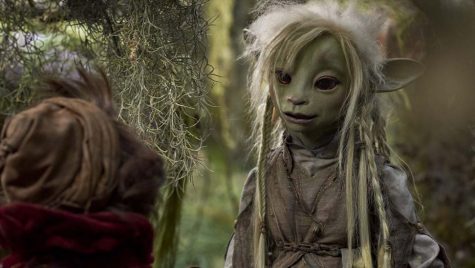 The Gelfling Deet meets Hup the Podling for the first time. These two become very close and lovable characters. (Netflix)

The technical work was astonishing in this show. The lighting was very colorful when needed and mysterious when it needed to be. The CGI was very well worked; nothing seemed buggy or unreasonable. The eyes of the characters and creatures were just like the movie. They looked around and blinked, creating a very human-like effect.

When the Gelfling dreamfasted, the animation was very detailed; there were purple colors and bubbles, with flashback type editing. The show created a heavier animated look to when the Gelfling have their essences drained, showing how much the operation worked.

In this show, the tongues of the Mystics and the Skeksis moved when they would talk. Although, sometimes the tongues would not move as they talked, which is hard to decipher if this was a choice from the creators or the movement was simply forgotten at some points. The tongues would move then not move even in the same scene, this being the only hiccup in the technical work.

Thra is a beautiful world full of mountains, canyons, underground caves, swamps, etc. The show ventured out, allowing the viewers to see many locations. The colors were breathtaking, as if we could really be there, seeing essentially a mirror world of ours. Of course, as the darkening gradually grew, the land became less beautiful and bright. This effect was still powerful in the show.

“The cinematography of the show was enjoyable,” said junior Evan Passmore. “When they’re climbing the big rock, the view of the sky and other scenery was pretty.”

In the movie, Thra is filled with creatures including the landstriders, nebries, fizzgigs, and so many more. All of these creatures, and creatures that weren’t in the movie, were brought to life for the show.

There were a lot of smaller creatures, but also big creatures that were either puppet or CGI. All the creatures moved in various ways and made different noises; some were creepy and others were cute.

The background creatures don’t make up much of the story, but when these creatures are shown, the world seems very beautiful and full of life. Even the creatures that were more aggressive and terrifying still showed a side of Thra that contained life not as kind. There was depth shown with these creatures. 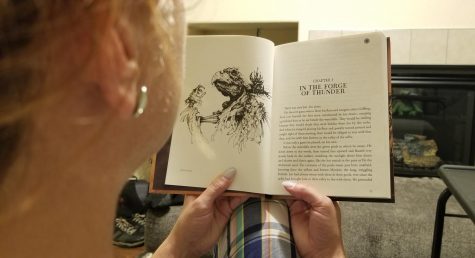 Sales supervisor and order coordinator Anna Nibbe reads one of the books for The Dark Crystal. This book is a direct narrative from the movie, while the other books go into more of the lore.

One of the most breathtaking aspects of The Dark Crystal was its soundtrack. It was menacing and magical. For the show, the music sounds similar. The instrumentals are very powerful and definitely fit in with the tones represented. The songs sound a bit like music people listened to during the Renaissance; very fun and quick.

However, the music soundtrack was more adventurous than scary or magical. It fits the show — due to the rebellious adventure the world takes part in — but there were scenes where it was intense and frightening, like with the Skeksis. As much as it was easy to tell that the Skeksis were to be feared, the music didn’t provide any backup to that.

Although the series did answer many questions, there were still questions I asked myself during the episodes and after:

Where is skekUng? He’s one of the main Skeksis in the movie, but he is nowhere to be seen in the show. For a while, I thought he was the general that stood by the emperor’s  side, since in the movie skekUng was also a general. But, this turned out not to be the case.
Will there be another season? The show didn’t explain a few major factors that brought the film to be, such as the Garthim terrorizing Gelfling villages and creating the prophecy in the movie. Either the series could continue that way —since there is more that happened after the series timeline— or I see a possible prequel to the prequel. There’s a lot that happened before the prequel and it would be very awesome to see that on screen.
Assuming the vision that Deet saw from the Century Tree was a glimpse into the near future, was the Gelfling she saw running with a blanket Kira’s mother? The movie has a dreamfasting sequence where Kira remembers her mother placing her in a small cave while wrapped in a blanket, before being taken away by a Garthim.

“The Dark Crystal” meant so much to me as a young child; almost a decade has gone by since I first watched it. The fact that a series developed to fill in the gaps of the story in a time where I’d be able to watch it is so fascinating.

I recommend this show to everyone, but I’d say watch the movie first; to see why there needed to be more of an explanation, the magic that people almost forty years ago experienced, and the work that went into creating it.

To learn more about the mythology of the world of The Dark Crystal, click here. Note that there are spoilers for both the show and the movie.