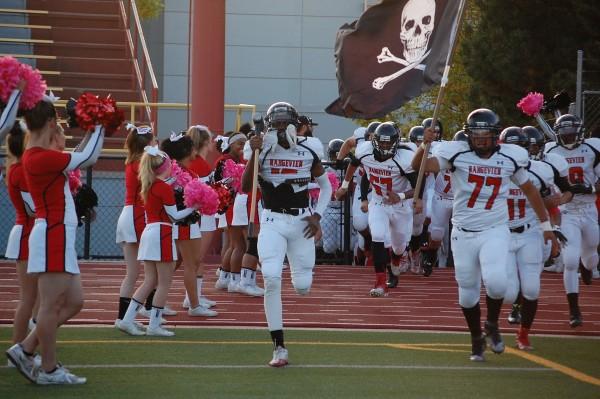 By Sebastian Wiegand, Sports Reporter
The last time the Raiders football team lost a league game was when this year’s seniors were in sixth grade. Over the past seven years, the Raiders have gone 40-2 in league games. They have won five league championships.

The Warriors jumped up on the Raiders with a first half score, making it 7-0 Arapahoe at the half.  Then, the teams remained scoreless until the end of the third quarter when AJ Thomas busted through the hole to score on an eight-yard run to tie the game at seven.  The teams then traded possessions before Arapahoe exploded for a 75-yard catch and run to put them up by seven. The Raiders had several chances, but they turned the ball over twice in the last five minutes to give Arapahoe the win.

With the win, Arapahoe Clinched the SMAC and sent Rangeview to their first league loss since 2009.

“It was Intense,” said Senior William Fifita, who blocked a punt and added a sack.

AJ Thomas once again had a big game, rushing for 161 yards and a touchdown.  Thomas has 928 yards on the season and is on track to finish with over 1000.

Rangeview will now prepare to take on Heritage.  Each team comes in at 4-1 in league play.  The Raiders are playing for a chance to make the playoffs as they come into the game 24th in wild card points and are just 3.25 points ahead of the 32nd ranked team, Eaglecrest.  Heritage on the other hand is playing for seeding as they are currently 14th.

“If we play good team football, we will come out with a win,” said Coach Hoffman.
The game will be at APS Stadium Friday and will start at 6:00.