Rangeview wins battle of the Raiders 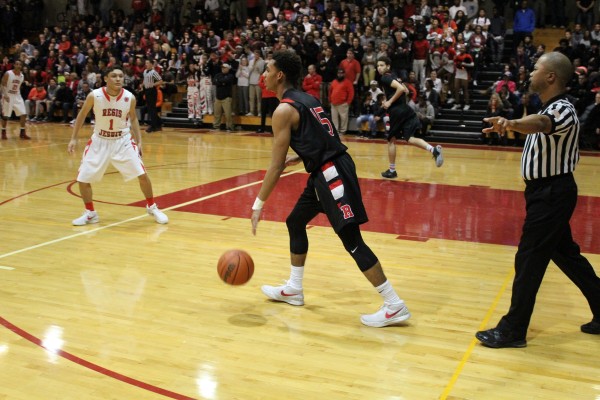 “It was big,” Said senior EJ Reed. “They (Regis) were favored to win, but we came in with confidence and won.”

Head boys basketball coach Shawn Palmer earned his 200th win of his Raider, and coaching, career against Regis and plans to rack in more wins this season. With a 10-0 hot streak — the undefeated Raider basketball team surely enters the game with confidence.

All eyes are watching the Raiders especially since they have climbed higher on the state rankings. According to CHSSA, the Raiders currently reside as the number one overall team in the state of Colorado. Although the Raiders have self-assurance, they still carry high expectations for themselves along with spectators around the state. Being the best team in the state is difficult to live up to — but the hunger of the Raiders is what drives them towards success.

“There’s a little bit of pressure,” Said Junior Elijah Blake. “Everyone comes out and gives us their best shot.”

The 2015-16 Rangeview basketball team is making history this season and don’t plan on stopping. Their work will continue tomorrow against George Washington at 7 p.m. Although maxpreps.com projects the Raiders to win, they are likely to show no mercy.  Despite the fact that GW comes into the game with a record of 7-7, they still posses firepower.  They have made teams such as Regis and Overland earn their wins.

After GW the boys will play Boulder on Saturday. Immediately after they play crosstown rival Aurora Central to kick off league play.

The Raiders will look to win league for the third consecutive season and clinch a high seed in the CHSAA playoffs.