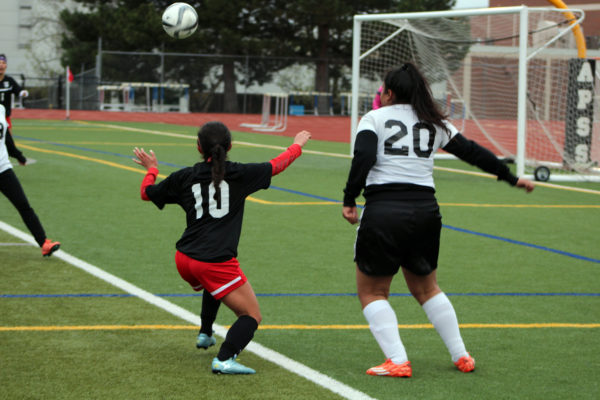 Feature photo by Sebastian Wiegand: Senior Nicole Perez goes for a header. Perez put up 10 points in her senior season for the Raiders.
By Anahi Castaneda, Reporter
Even after the Lady Raiders lost 6-0 to Columbine High School to end their 2016 season, their heads are still high. With this being their last game of the year this loss was devastating not only for them but for their coaches, family and Raider fans.The girl soccer players have always put in good work and sportsmanship on the field, and they are excited for next year already.

Coach Webber said, “A 6 to nothing loss is always discouraging. However when faced with diversity we asked the girls to step up and they rose to the occasion.”

This was Weber’s first year as coach after taking over for long-time coach Mr. Strouse.

“I’m very happy with how we

played, they were a solid team, we held our own during the whole game,” Sophomore Mary Perez  said. “I feel we all had a great game, we all worked our butts of. Although we didn’t get the win, we left the field with pride.”

Over the team was happy with this season. The senior players left the field feeling of their season as a whole and the players coming back next year left the field with a positive mind set ready for next year to work even harder.

“As whole, this team looks out for each other.” said Senior Nicole perez. “ We took the field together and worked for each other every game. Everyone is talented in their own way and i love how all those talents came together like a puzzle. We had a great season and i wouldn’t have wanted to take the dubs with anyone else.”

Lady Raiders finished 3rd in league play this season but no doubt that in future years they will be coming with first.
With such positivity Weber says, “Season was filled with ups and downs but we are gaining a gauge of our character that we look to build on in future years.”