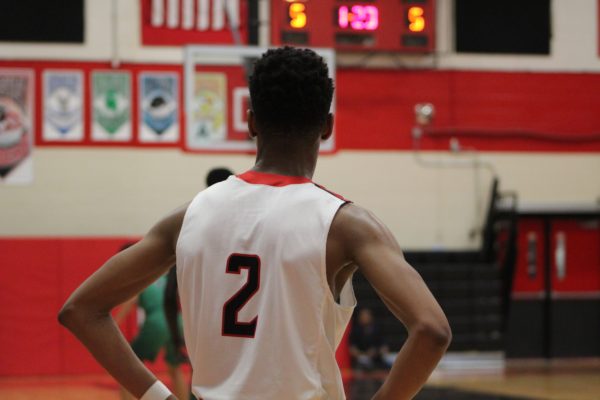 Feature Photo By: Vanessa Guereca – Rangeview senior point guard Matthew Johnson stares up at the scoreboard as lead begins to slip away. This is his fourth year playing on Varsity.

Rangeview has had been living in the shadow of their historic Final Four run last year for the majority of the season, and they have been struggling to live up to such high expectations. The Raiders are now 4-7 after a surprising loss to the Overland Trailblazers, and a blowout loss (81-45) from George Washington. After an undefeated regular season last year, for many this was unexpected.

In Tuesday night’s game, the Raiders were leading the defending state champions for the first three quarters, but lost their lead within the final two minutes to lose the game 71-66. After the stands emptied, fans left disappointed but astoundingly they left unsurprised.

This isn’t the first time Rangeview has taken a loss after leading for the majority of a game and being the victim of a heart-breaking comeback.

Rangeview lost to Rock Canyon after leading for the first three quarters, and in the fourth Rock

Head Coach Shawn Palmer describes the team’s struggles by saying, “We’ve been really competitive but lost hard fought games whether it was the last minutes or two overtime losses.”

The struggle may seem obvious to few, but there may be many factors to the team’s recent rough patch. The Raiders are without star-player and University of Denver commit, senior Elijah Blake. The team has also implemented more freshmen into the rotation than usual this year, and has lost their entire starting lineup from the 2015-2016 season.

Sophomore basketball player Vitor Barros, who is also a Brazilian exchange student stated, “In order to win more games, Varsity needs to keep their consistency and patience during the end of each game. They have been playing very well, but they need to make smarter plays. The turnovers have been killing us.”

These reasons all may have their role in the recent losing streak of Rangeview, but if the team learns to maintain consistency all four quarters of a game, they may be able to bring more wins back home.

Keep up to date with the team’s latest stats and games here: